The package films are done on my Disney blog. Check out this review of The Adventures of Ichabod and Mr Toad.

We’ve made it my friends.  The end of the package films!!

And I’m glad to say this last one is the best, and it continues Disney’s great tradition of taking risks and doing things that are unexpected.  Next we have: 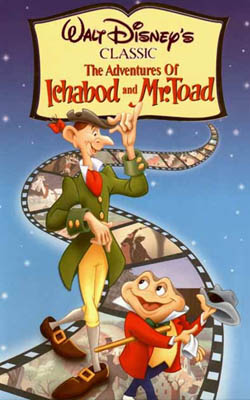 The Adventures of Ichabod and Mr Toad was released in 1949 and did well at the box office but became a fixture of the 1980’s and 90’s airing on Disney channel around Halloween.   Both of the stories of Ichabod Crane and Toad are pretty dark for Disney but then again Disney has often been pretty dark.  The devil in Fantasia.  Pleasure Island in Pinocchio.  The haunted forest in Snow White.

One of my favorite critics on youtube, the Nostalgia Critic, has a great series Disneycember which is worth checking out and he has this video on why we so often scare children in movies.  It has some foul language…