So today is the first day of the new job!  I started to write this post many times but then would stop because it was seemingly more tweet than blog worthy.  I am part nervous, part excited, and that’s basically it.

It’s something entirely new as a career and I have no doubt that transitioning from hobbyist to a career in digital marketing will be a challenge.  However, I also know I am starting small, part-time and we are all committed to being patient with each other.

It feels strange starting something new.  It’s probably been since starting the job in accounting which was way out of my wheelhouse.  I also was thinking back to the the first day in the MTC and the mission field.

Wondering what it was going to be like and if I could do it.  On one hand I want to give both of the Rachel’s at those points a hug and say ‘you’ll get through the tough times’ and also say ‘you do it and you do it well’.

Looking back on those experiences I realize the worrying was justified and it wasn’t.  Those were some of the toughest times of my life beginning but the worry of failure wasn’t really justified.  I wasn’t perfect but I think I turned into a good missionary and then accounting clerk.  Regardless it all worked out for the best.

What about you my friends?  What in your 30’s+ have you started anew, afresh? Whether a new marriage, job, child etc?  Were you excited and freaked out like me?  Any advice?  How has it been different starting something new in your 30s vs 20s?  It seems like it could be more challenging and yet more rewarding.  Would love to hear your perspectives.

This morning we had a conference call to go over the company I will be working for and in the next week will be filling out forms and starting projects.  It is a new position so there will be some moving and stretching as we figure out what works best for everyone.  I will probably be going out to Georgia sometime this summer to see the facilities and meet my co-workers.  The main offices are in Dalton Georgia so that should be a fun place to visit.

So that was basically it.  We did a basic orientation of the company and most of the answers to questions were ‘I’ll get back to you on that’.

I think I may just have to read Julia Child’s book My Life in France.  It’s one of my favorites for a lot of reasons but I love that she had the guts to change her life later in life.  She didn’t graduate from culinary school till she was almost 39.  Then she spent the next 10 years of her life working on Mastering the Art of French Cooking and in 1961 when she was 49 it was published.

Everything we know about Julia Child started then.  At 50 she became the Julia Child we all know with the debut of The French Chef.  How many people do you know that have started something so big at 50?  It’s so inspiring to me.

Her marriage to Paul Child is another inspiration to me. They met when she was 32 and married at 34.  He seems to have been worth waiting for.  As an artist he no doubt wanted to be creative and energetic but he chose to work as a bureaucrat for his job so that Julia could go to culinary school and write her book.  What a wonderful example of love and support.

Most people would find the notion of a housewife going to Le Cordon Blu in the 60s to be silly but not Paul Child.  In fact, it was his insistence that  kept her motivated when it got difficult.

I wasn’t planning on talking about Julia and Paul on this post but they are an inspiration to me and as I start this new journey I hope to embrace the adventure like them.

Read My Life in France.  I know you will love it!

So share with me your new experiences.  What you learned from them?  What your inspiration was?  What was tougher at 30 than at 20? What was easier?  Thanks in advance. 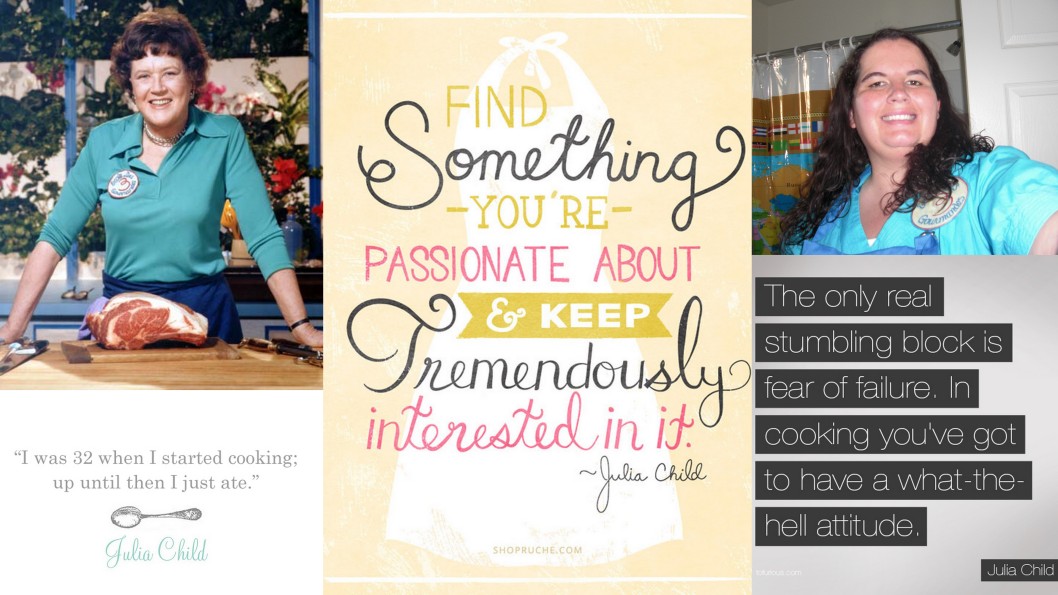