Not many people read this post when I first posted it but movies about work are favorites of mine. Up in the Air, Descendents would also make my list. Each year some of my favorite movies.

With the barrage of  health problems thrust at my door in recent weeks it can be no surprise that my blog has become a strange mixture of a detailed health report and a personal medical venting forum.  I suppose the appropriateness of such posts depends on the definition and purpose of a blog.  If it is a meant to be an opportunity for the writer to portray his or her life to the world then my blog has been a true blog in nearly every sense of the word. If it is supposed to be the syrupy weekly equivalent of a holiday newsletter then I have failed!

I am actually quite grateful for the literary art-form and the freedom it gives me to express my thoughts in a way vocal conversation can not. In talking with a loved one I get an immediate sense of satisfaction and pleasure; whereas, writing…

So I’m working on my novel.  I’ve now described Santa, the Elves, Becca the stay at home mom and Marnie the single working sous chef.  Both women see each other at a mall and wish they could have each other’s Christmas just once.  Santa is worried he is going to lose them and decides to enact the old Shanghai Switch.  This is something he tried successfully switching an emperor and peasant back in the day.  He has worked hard to keep these girls as believers and this seems like the only way to save Christmas and more importantly their friendship.

So, he sends down his head Elves Spencer and Mortimer to give them magic snowglobes.  When shaken the girls magically switch places and are in each others bodies.  It is a tough scene to write because I have to capture the emotion for both women while having Santa as the narrator.

This is what I have come up with today.  I am now on word 5,824.  This is right on target. I realize the grammar may not be up to par so if you can focus feedback more on the content that would be great.  I may not get to it until next month when I do my major editing but it will all be helpful.

Before you know it I can see Spencer and Mortimer at the mall on my screen.   Blending in with the staff they smile at the kids and make their way to the top of the line.  Marnie is still watching Becca’s photos being taken and she spots Mortimer.   As Becca and the kids leave Becca see’s Spencer.

“Don’t forget your parting gift”  the elves whisper to both girls.  This is for our 400 and 401st customers.  Merry Christmas and enjoy the miracle of the season”

“Thank you” both girls say and they hug and head their separate ways.

As they get in their cars Spencer and Mortimer return to the switchboard.

“The target has been successfully launched”

Both Becca and Marnie climb into their cars and fiddle with the radio trying to find the Christmas music.  As t they hear the old Bing Crosby White Christmas they think of the snow globes.  Getting them out they sparkle and which makes both girls smile.  Then the playhouse catches their attention.  It has purple walls and blue curtains.  It even has a cat that looks remarkably like Marnie’s cat Pepper.  It must be some kind of coincidence made by the snow globe providers.  Amazing.

With a nostalgic sigh they shake the snow globes and the white fluff goes everywhere.  Suddenly the world starts spinning around them.  Marnie can see Becca and Becca can see Marnie, but its like they are floating over each other.  Then there are firecrackers and pops of light and sound.  Pow! Bang! Bzzz! SSSSSS

Becca wakes up first, and lets out a yawn.  What a day.  It was so hot in that mall and the kids were so difficult.  She must have blacked out for a second.  What was going on?  Then she noticed the quiet.  Where are the kids?  Looking around she sees she’s in Marnie’s car.  It’s a lot nicer than her car and there are no gobs of chewing gum on the dashboard or French fries stuck in the slot for the seatbelt.

Did Marnie take the kids?  What’s going on?

The fireworks are popping for Marnie and she feels like Dorothy in Wizard of Oz.  In fact, she can almost see Mrs.  Gulch riding her bike in the tornado.  It is scary but oddly peaceful.

“Mom, can we go to the library now?”  Callie is pulling on her winter coat.   Marnie looks down at Callie.

“I’m sure your Mom will take you later in the day” she says looking for Becca in the old minivan but not seeing her.

“What did you say Mommy?”  Callie asks

Addie is getting upset in her carseat and the twins are fighting in the back.

“Where did your mother go?”  Marnie asks.

As Marnie grabs the steering wheel she notices her hands don’t have the normal scars from the kitchen.  They are dry and don’t smell like the rose water perfume she normally wears.    Looking at her jeans she can see the elastic band and grey belt .

Wait a minute she didn’t wear a grey belt? Pulling down the mirror above the windshield she lets out a gasp when she see’s her reflection.

Picking up Becca’s phone she calls the number marked Marnie and waits.   Then she hears a familiar voice coming from the phone.

“Hello, Marnie what is going on?  Are the kids with you?

Soon the girls cars are next to each other and I can see them staring at each other in disbelief.  They both try to talk but can’t believe when their voices are not their own.

Becca doesn’t know what to do so she lets out a little yell and runs over to the van.  The kids smile at her and look puzzled.

“She’s a little confused at the moment” say both women out of sheer instinct.

Huddling together next to the car they  both say at the same time “What are we going to do?”

“We can’t do that.  I have to be at work tomorrow and not you me but me me.  Didn’t you hear me tell you about the promotion?  If I lose this it could be my only chance.  They won’t give Becca the mom a chance at executive chef” says Marnie.

“Well, are you saying you want to go home with the kids?” says Becca.

“At this point I don’t think we have any other choice.  We will have to figure this all out later.”

“I guess but call me as soon as you get home.  Promise”

“I promised my boss I’d be back at 6 to give the update on the Santa and my ideas for comfort food for the food.  Tell him smoked salmon, 6 cheese penne, green pea caviar and cheesecake ice cream made with liquid nitrogen.”

“I can’t remember all that!  What am I supposed to do in a professional kitchen” says Becca.

“Please! I can’t lose this job.  I’ve been paying the girl tax for too long.  Please help me out.   Here I’ve written it down for you”

“Bye kids.  I will see you all in the morning” says Becca and they all light up.  They love their aunt Marnie.

“Ok.  Let’s go” Marnie says and they give a grumble.  “I wish we could have Christmas with Marnie” Julie grumbles

“Don’t worry.  You will be seeing a lot more of her than you bargained for.  Now sit down.  Let’s go” 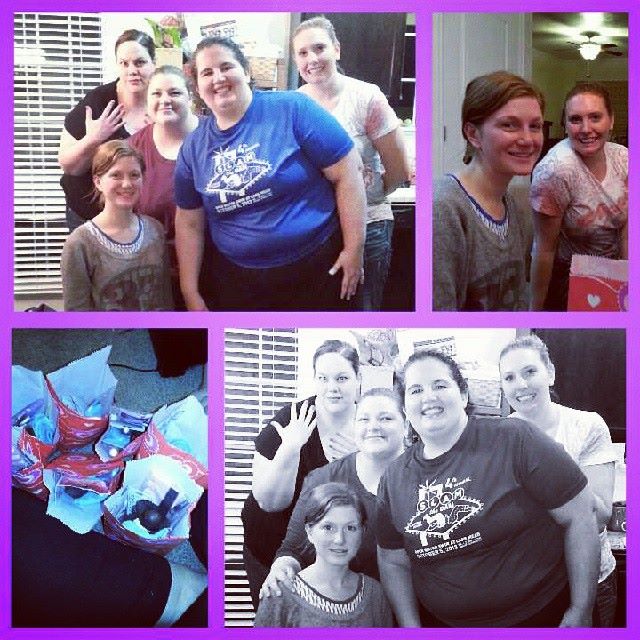 I’ve got a challenge for all of you lovely readers.  I defy anyone to produce better friends than I have.   It can’t be done.  They defend me when I am sad, are incredibly loyal and also a lot of fun.   I just love them and after the month I’ve had I wanted to say thanks and relax with my girls.

A few days ago I was talking to a box review friend that unfortunately I can’t remember who it was (if you are out there please remind me).  We were discussing how we had more make up from box reviews than we could deal with.   It really starts to add up quick and not all of it is good for my complexion so it could go unused.

So my friend and I were talking about our excess makeup problems and she told me she was going to have a makeover party with her friends to have fun and use up the makeup.  All of you know I love a party so this sounded like a great idea to me! Plus I felt exhausted by October so why not?

I put out the word of a girls night out to my friends and gave them plenty of warning and reminded them a couple of times.  I also invited a new friend Lindsay who I know from twitter.  I always have an eclectic group at my parties.  This was no exception.  There was Emilee and Rachel who I knew from singles ward and Hawaii 2011, Stefanie my roommate from 2006-2007 and bestie, and Rachel my friend from book club (yes, 3 Rachel’s- party!) .  I like having different people at parties so you have a mixture of conversation and personalities.  It is a risk but usually leads to the best time by all.

The party was easy to plan.  I put together goodie bags using dollar store items (and some see’s candy!).   I figured it was my chance to put together my own beauty bag so it fit well with the theme of the party.

The food for the party was easy.  I got a take and bake pizza and some baked chicken strips from a local restaurant. I didn’t have to cook anything which was good because I have been working and starting nanowrimo so no time to cook!

The girls got there at different times and we chatted for the first hour or so.  Then we ate and started our makeovers.  Masks, apple peel (from Juice Beauty, a great birchbox find) and exfoliants were used by various people.  Then we moved on to the eyes, lips and nails.  We looked very pretty by the end of the night!

Then we finished up the night watching Joss Whedon’s new Much Ado About Nothing which was really fun.  They shot the film in 12 days with hardly any  budget but that was all for the benefit of the film.  I liked the black and white photography.  You could tell the performers were all friends (I guess Whedon does Shakespeare readings with his friends (great idea for next party!) and he had a break between the Avengers and decided to make a movie in his house.  Love that!

So I think the party was a great success and I look forward to the next one.  What do you gals like to do for girls night out?   I think as a 32 year old singlite I’ve got the girls night out down.  So fun!

Now off to write my next section of nanowrimo!  How are you all doing on your word counts?

“For man is a giddy thing, and this is my conclusion.”