(part of this posted yesterday without my realizing it.  Sorry)

We decided to do something different this month for book club.  Instead of all reading the same book we decided to each read a Jane Austen and then we would meet and discuss them.  I’m looking forward to it.  So, I had to decide which Jane Austen to tackle.  I have read all of them, of course, so it would be rereading for sure but which one? I realized I haven’t read Pride and Prejudice for years, maybe since college, and it seemed ripe for another perusal.

So this week I started to read it again, both via traditional and audiobook, and I wondered at first if I would be as dazzled as I was at 17.  That year I was going to community college, living in California with no friends and I had a month long winter break to fill up.  In desperation I decided to read Sense and Sensibility.

Its funny because its probably Jane Austen’s most challenging book (its pretty slow moving) but being a big fan of the movie I loved it.  In fact, I enjoyed it so much that I immediately read Pride and Prejudice, Emma, and Persuasion within the course of my break.   Its hard to say what I responded to so quickly in Jane Austen’s prose.  They have such austere characters within the confines of a culture so distant from my own; yet, I was completely engaged.

(so I didn’t realize this blog was published yesterday. Sorry guys.  Here’s the rest of it)

In the end, the long lasting effect of Pride and Prejudice and other Austen novels persists  because her characters are fully-rounded, strong-willed women.  This translates to any era and gives all women something to hope for.  The fact is marriage and romance will always be the grand desire of the human heart because we all seek to be understood by at least one person with that one person being forever loyal to us.  All of Jane Austen’s  characters spur social customs and refuse to settle for anything other than complete understanding in the marriage relationship

Pride and Prejudice is her masterpiece.  It creates characters who do not even know their own hearts until they meet.  It is a story that teaches the reader about human frailty.  If left only to our own devices (as Darcy remarks about his childhood) we will develop certain flaws that will cause us to see the world incorrectly.  It is only when someone points out those flaws that our world is opened and we can truly love.

Both Darcy and Lizzie fail to see anything but their own perspective or point of view.  That is such a hard lesson to learn and how great to have characters in a novel help educate us!

Pride and Prejudice also shows that the human brain knows intrinsically what will make us happy.  It is only when we listen to the world’s definition of happiness that we are left cold.  Lizzie knew that a marriage of convenience, despite its worldly benefits could never make her happy, and what is life if it is not happy?  Darcy must have also known that Lizzie was the person who could make him happy despite her refusals.  Both characters learn that when your soul is telling you to go a direction, even if socially divergent, go, run if you have to.

One of the most flawed characters in Pride and Prejudice is Mr Bennett.  He makes no choices in his life and is content to let it pass him by.  A lazy parent at best, Mr Bennett doesn’t intervene with Lydia or the girls until disaster strikes and even then he admits he will get over the shame more quickly than he should.  Lydia is an idiot, but she is young and at least she has made choices and has passion.  I can respect that much more than idly sitting by and doing nothing.

Wickham is of course the true scoundrel of the story.  Having all the appearance of good nature but none of the moral fortitude he oils his way into every situation, getting what he wants at great cost to others.  However, he does provide an important boost to the plot.  By being true evil, he lessens and then removes any remaining angst the reader feels about Darcy’s pride and conceit.  Perhaps pride is not so bad when it helps avoid wreckless abandon, theft, lust and depravity of Wickham? He also gives Darcy a dramatic way to show his love for Lizzy that leaves her (and the reader) overwhelmed.   There is no doubt Darcy LOVES Lizzy after what he has done.

I happen to believe that all modern romantic comedies can be traced back to Pride and Prejudice and Taming of the Shrew. In both stories you have strong willed souls who are right for each other but just can’t see it.  This tension makes the reader route for them along the way.  Both are written with a wit and satire that makes the journey fun (something most rom coms have lost today).

With both, you feel immediately that the characters are good, if flawed people and you want to see them happy.  That is what most rom coms today miss when they borrow the old formulas.  Yes, the characters don’t like each other at the beginning, but they are both quickly presented as good people who you want to be happy.  The reader is rooting for some resolution all the way and when it seems to be the most impossible the book is at its finest.

I think this is why Pride and Prejudice bears so well to all kinds of treatments whether it be Bollywood, the 5 hour BBC, or the 2005 Kiera Knightly version.  Its hard to make me not like these characters and get drawn into the story.

Yes, we know how it will turn out but its the delightful journey of ‘how’ that makes Pride and Prejudice so great.

It is truly a masterpiece and I enjoyed reading it again.  You should read it again too!

Pride and Prejudice was published in 1813 and is 200 years old this year.  Happy Birthday! 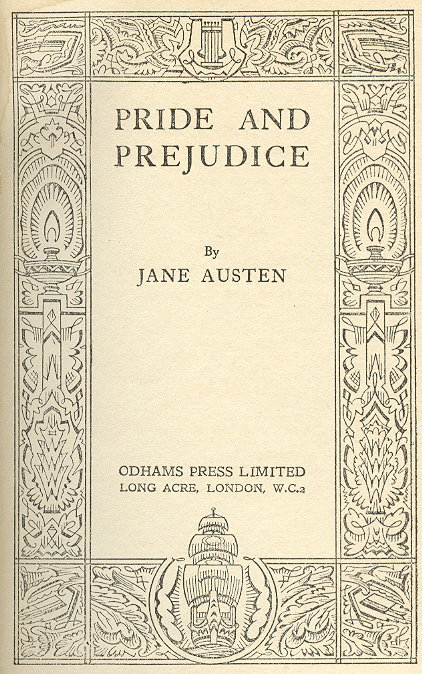