The other day I was talking with a man and he said:

“You probably hate talking about sports”.

I said, “No, I like sports. I am a bit wishy-washy in my following but I have always liked sports- especially the Olympics.”

“Really?”  He said in surprise.

We then talked about the Utah Jazz, Jimmer, BYU football, Olympics ect.  I am not trying to say that I am an expert or some kind of die hard fan but I enjoy any good competitive match/race/game. I also pride myself on being well informed on a variety of topics including sports.  Unlike some girls, I can hold my own in a sports-related conversation.

I think the Olympics is particularly exciting because they only happen every 4 years- making the work that much more intense, the results more amazing.

There are some women who hate for their husbands to be interested in sports but I would way rather have that then video games. At least sports is something we can enjoy together.  I hate video games and am truly terrible at playing them (especially anything with the controllers I can’t seem to figure out). Just ask my brother.  He tried to teach me how to play Halo and it was a sorry site. 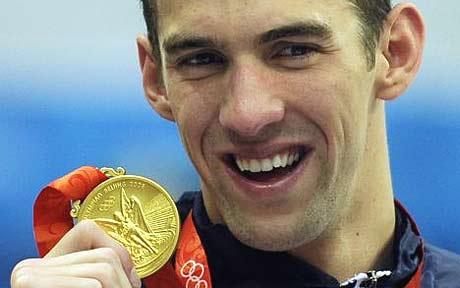 I also think there is an inspirational element to sports that doesn’t exist with video games.  Lately I’ve been reading Michael Phelps book entitled “Michael Phelps No Limits: The Will to Succeed”.  It is a standard inspirational sports book with cliched platitudes encouraging the reader to dream big, train hard and never shy away from bold goal setting.

Yet, somehow I am enjoying the book very much.  Michael Phelps is such an amazing story that I don’t know if he needs great writing accompanying his book?  I am getting exactly what I wanted when I bought it- a giant pep talk to get me  in the water- to push me forward in life. Phelps’ accomplishments at the Olympics were so amazing that he has earned the right to be an athletic inspiration.  That’s what I want from him and that’s what his book gives me. 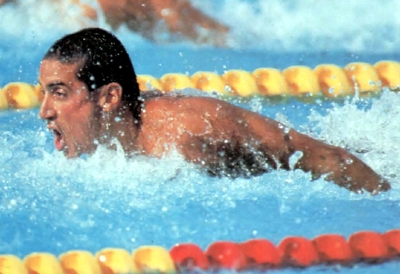 Anyway,  I thought I would share with you the story of one of my athletic heroes which you may not be familiar with.

In 1992 I was 11 years old watching the Barcelona games when I heard about a swimmer named Pablo Morales.  His story has always impressed me.

Training his entire life he worked hard to get to the 1984 Olympics and won 2 silvers and a relay gold.

Then as a national champion and world record holder in the 100 fly he was heavily predicted to win gold in 1988. With weighted expectations he had what some say was the “worst Olympic trial swim of all time” and failed to even qualify for the Olympic games.  Devastated Pablo stepped away from swimming and went to law school.

In 1992 he decided to “unretire” and came back to swimming.  By this point he was 27 years old and had been away from competitive swimming for years.  The magnitude of his task was great and the likelihood of failure high but nevertheless he decided to make the attempt.

Can you imagine the demons that must have been going through his mind when entering the water at the Olympic trials?  Michael Phelps says that the “mental aspect of sports is just as important as the physical part.  There can be no doubt about that”.

By choosing to enter the race Morales decided to conquer the mental Everest that only past memories can make so exceptionally difficult to climb. A Sports Illustrated piece on the race describes the moment:

Where did he fit? He had fallen into the first category, the disappointments, in ’84 and again at the ’88 trials. Was it better to be in the second category, an unknown quantity, a question, a possibility rather than a probability? He could only wait to see where his story would fit in the string of stories. “I had no idea what to expect,” he said. “All I knew was I was going for the gold medal. That was the dream.”

Was there any swimmer on the team who did not know how difficult a trip he had undertaken? Gone from the sport for three years, retired, totally out of the water, he had traveled east to tackle law school at Cornell. He was eating cheeseburgers and reading torts. Gone. His decision to try a comeback had come upon him last summer in a growing rush. Could he do this? His mother, Blanca, was dying of cancer in Santa Clara, and then in September she was dead. He was thinking of her and he was thinking of himself and he was thinking of the Olympics. He went off on his own little crusade, perhaps riding toward a creaky windmill, off on a fool’s errand, but perhaps not. There were no shoe contracts or seven-figure deals being offered. He simply was giving a year of his life to see how well he could do.

“It was not unfinished business, trying to do something I never had done,” he says. “I never looked at it like that. I think all parts of your life are experiences. You experience one thing, then move to another. These were separate. I suppose you could say I was going toward the windmill, but I never thought that. I didn’t know what to expect. I just wanted to see.”

“At the finish I looked at the scoreboard, and it had such an unreal quality,” Morales said about his win in the 100-meter butterfly on Monday, completing a comeback at 27 years old that at one time seemed only a faint prayer. “Once something like this happens, you wonder if it really happened. You wonder the same way if you win or if you lose. Did it really happen?” 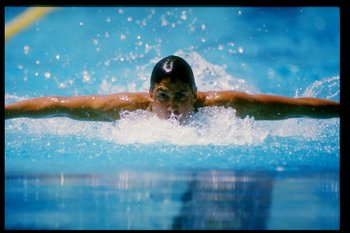 He did it! He won the gold despite all the odds.  It’s a great story!

This is why I like sports because it helps me remember the potential of the human body to perform and the power of the human mind to excel.

What sports moments inspire you? Please share. This is one of many I have.