This morning  I was a little bit sad.  As many readers of my blog know several months ago I attempted a rock climbing wall for the first time.  This was much harder than I thought it would be for a lot of reasons.  It is physically demanding but also mentally hard.  At least for me it is hard to get over the sensation of falling. The footholds feel small and after a few minutes my arms are burning.  Then I start to feel anxious and I have to let go. Have any of you climbed rock walls before?  Do you agree that it is difficult?

Anyway, I was hoping this time I would be able to get higher than last time.  The climbing wall has three levels- at each level the spacing becomes further a part and more difficult.  Unfortunately I was still unable to get past the first level of footholds.  I tried twice with all my strength but no luck. (I was less winded than last time and less sore). I’m not going to deny that I felt some discouragement at not being able to improve. I have been working so hard, watching what I eat, exercising like a maniac (5 times a week), and increasing the intensity of my weight lifting/cardio routines.  My trainer could tell I was down and she brought out all of the ways I’ve improved.  (she’s so great!).  I guess it is hard when things don’t move as quickly as I dream. 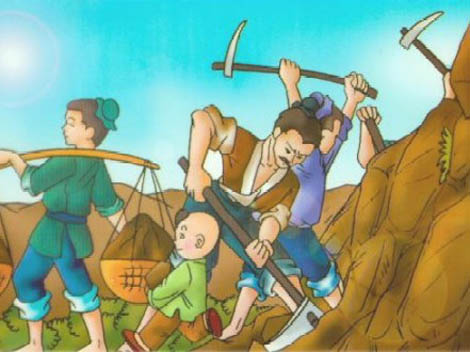 After rock climbing I decided to do some cardio and did the elliptical for 35 minutes at an intense setting (480 calories burned).  While I pushed through the cardio I remembered a story I heard in my Chinese politics class at BYU.   It is an old fable called Yu Gong Moves a Mountain.  It is about a man who has 2 mountains in front of his house.  Eventually tired of maneuvering around the mountains Yu Gong says, “The two mountains have given us too much trouble getting outside, how about we move them away!”.  So Yu Gong and his sons begin digging away at the mountain each day. Through the storms and winters they keep digging “until one day, God in heaven was moved by them and sent two immortals to take the two mountains away.”

My journey is kind of like Yu Gong’s- it feels like a mountain in front of me that I will never be rid of.  It feels insurmountable. However, by digging each day and doing my best I am making progress- despite what the rock climbing wall says.  This was shown to me after I finished the cardio, and I decided to weigh myself for the first time in several weeks.  Looking down I was stunned to see 272!  I did it again and then again on a different scale- 272.  This means I have lost 41 lbs since I started!

I’m not giving up! I’m meeting with my trainer every week in December just to be sure I don’t get off track.  I will move this mountain!  Thanks for all of your support.

Extraordinary delight of musicals and spirituality