As anyone who has read my tweeting of late knows- I have been sick.  For the last month and a half I’ve suffered from a sinus infection that refuses to go away.  Even now after my second dose of antibiotics I am still phlegmy and not 100%.  Cross fingers that I will be 100% by the end of the week.  Needless to say the last month and half have been difficult and at times discouraging.  Thank goodness I have a job that is flexible and understanding (although the billable hours have been low, I’m surviving).  I went to the doctors on Monday and he said sinus infections are not considered chronic until they hit the 3 month mark!  Can you imagine feeling miserable for 3 months!  Shocking and depressing to even think about.

One of the things that depressed me about being sick is that it caused me to abandon my exercise/healthy eating regimen.  I had lost 5 lbs and was doing great.  Now as I improve, I must start again….what a discouraging thought, starting again.

What have I done to keep myself sane- you ask? Well, among other things I have been watching the college Bowl games.  My brother in-law got me started (and he taught me a lot about the game along the way!) during my breaks at Thanksgiving and Christmas.  Of course, I had to watch the BYU winning game (MAACO Bowl), but I’ve also caught many others including the great matchups of Ohio State vs Oregon (Rose Bowl), LSU vs Penn State (Citrus Bowl), and Boise State vs TCU (Fiesta Bowl).  I’m actually excited for the BCS championship tomorrow between Texas and Alabama.

It’s funny because I haven’t followed any teams except perhaps a passive interest in BYU.  Some would scoff at my type of fair-weather fan claiming that intense devotion and passionate following is the only way to be in a sports fan.  I have several points in response: First of all, I have had a lot of time on my hands trying to get better.  Second, I enjoy almost any type of intense competition (wrestling, golf, and MMA I just can’t get into- sorry boys!).  Ever since I was little I liked both watching and attending sports games/matches.  I’ve been to Orioles and Oakland A’s games for baseball and Kings and Jazz games for basketball.  I also had the thrill of attending a variety of events at the 2002 Winter Olympics in Salt Lake (I will do an entire post about the Olympics in Vancouver. I LOVE the Olympics.  It’s wierd but it is the most intense competition there is.

The Olympics is really the only sporting event I never miss.  Everything else is hit and miss.  I will have a year where I get into the NBA playoffs, March Madness, the World Series or like this year the college bowl games.  In my defense my skitsafrenic approach makes me surprisingly informed on a variety of sporting events.  When I went on my cruise last year the boys at my table were all surprised at the random sports trivia I knew.

My approach also keeps sports in balance and for the entertainment it is meant to provide.  I keep the players at a distance and enjoy the competition before me without the time-sucking effort of fanatical idealization.  Look at Tiger Woods, if he had been kept in his place and simply appreciated as a source of competition- not a hero, or an idol, or a spokesman- than perhaps his temptation and fall would not have been so great. He should be enjoyed as someone who plays an exciting game of golf- and that’s it.

So that is my defense of my bandwagon approach to sports.  In a weird way I am grateful for the bowl games and the pleasant distraction they have been this fall.  Next up Vancouver Olympics 2010!!!!!! 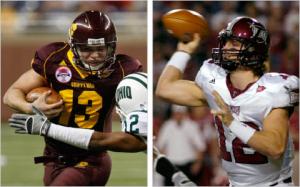 One thought on “I am a Bandwagon Fan and Proud of It!”