I just found out today that my mentor and friend Dr. Matt Holland had exciting news- he was named as President of Utah Valley University in Orem Utah! This is a large college nearby my Alma Mater Brigham Young University. The school has 23,750 students and was recently upgraded from a college to a university.

I can’t think of anyone who deserves this more.  I met Dr. Holland as a student in political philosophy in 2001.  I had taken classical political theory previously, but I hated the teacher.  He was one of those teachers everyone said was “easy” but I found it boring.  I actually stopped attending after a while and just turned in my tests. I thought the class was so obvious and boring.  Despite being absent I still passed the class and gained an appreciation for philosophy.  For some reason I decided I wanted to be a teaching assistant for a political philosophy class (which is odd considering my experience with the class).

To improve my grade I took the class again for summer term and was lucky enough to have a brand new teacher named Matt Holland.  I loved all my philosophy classes, but Dr. Holland’s was special.  He just made me want to be a better person, to look at these theories and see how they could improve my life and the lives of those I love.  All of my philosophy classes helped me understand the world, helped me understand myself- and helped me know how to express my soul.  I remember in high school feeling like I could never convey what was inside my heart- the thoughts were there but the words would always disappoint.  It such a cliche to say but it was in college I found my voice.  Dr. Holland inspired this journey.

Just before his class was ending I approached Dr. Holland about being his TA (and when I say approached I mean I called him about 15 times in 2 weeks).  I knew that I needed to be persistent because I didn’t have the greatest GPA. Let’s put it this way- there were definitely students with higher GPA’s he could have hired. Something inside me knew I needed this experience. To my delight a week or so before class started Dr.  Holland called me and said “So, you want to be my TA hah?”.  After that, I was hired along with two of my best friends in the major Raelene Kochel (now Bradley)  and Bob Floyd.

See if you can feel my enthusiasium from a journal entry dated 09/01/01 (just after getting the job)?:

Oh, that’s right I am going to be a TA. I haven’t told you about that yet! I ended up getting an A- in my 201 class and I asked Dr. Holland if I could be a TA and he said sure! I am so excited. The best part of it is that I am going to be TA’ing with my friend Raelene who is super nice. She is honestly probably my best friend in the political science major. I really want to become more involved in the major this semester because this is my last chance. This TA will be a start….I am kind of scared to be a TA but I think it will be a super good experience and Dr. Holland is super nice. So, I am excited (If you couldn’t tell!).(09-01-01)

Now listen to a letter I wrote (don’t know if I sent) to my parents  just after my job is finished:

I think out of everything I am the most proud of my work with Dr. Holland. I have been thinking so much lately and I know that I am a better person for all that I have been experiencing. It’s intimidating to get up there and teach other students or grade papers, but he makes me want to try harder. My hope is that maybe when I see you again at Christmas, that you will be shocked at how much I have grown and changed.(12-09-01)

It’s hard to explain how a simple college job could be so important to me.  I cry whenever I think about it.  As part of this job I graded papers and tests, tutored students, created multimedia presentations, and even instructed the class on grammar once!  I’ve always respected that Dr. Holland never  questioned our grades, never second guessed us.  He had faith in us.  There were times when he gave correction but it was in a way that motivated, not discouraged.  Dr. Holland was without a doubt the best boss I have ever had. I wanted to be great because I knew he believed in me.

It was also a great experience to work and instruct students.  I remember the first time I connected with one.  It was an older Latino woman who was struggling to understand Plato’s cave. I could not figure out how to explain this concept in a way that an ESL student would understand.  After several attempts it finally occurred to me to ask if she had seen the movie the Truman Show?  She said she had.  I then showed how the set Truman is stuck in is similar to the cave.  Everything surrounding Truman is like the shadows in the cave- they aren’t real.  They have been placed there by the director, just like the shadows are placed in the cave by the philosopher kings.  She got it!  It was so exciting to see the light bulb moment in this student.  It made me feel smart, made me feel confident, in a new way.  I owe that moment to Dr. Holland and his faith in me.

Once I finished being his TA, I had Dr. Holland as my professor for my senior capstone class.  It was possibly the best class ever.  There were only 7 of us in the class- and Raelene and I were the only girls.  Last year I asked Dr. Holland if he’d seen anything like us again and he said “No, you two are legends”! He also said Raelene and I were two of his favorites! (That meant a lot to me!).

I started this class determined to get an A.  Despite learning a great deal in my classes, I often felt frustrated by my inability to get A’s.  I wanted to show Dr. Holland I could get an A in the most important class- the senior capstone.  I also wanted to prove to myself I could do it.  The class was on the philosophy of Thomas Jefferson and the main assignment for the class was to write a 20 page paper on his political philosophies.  I chose to focus on Jefferson’s theories of education. Here is the link to the paper if anyone is interested in taking a look:  Senior Capstone Paper.

Anyway, I worked for hours on the paper.  My friend Marcus and I met in the law library and poured over them again and again.  It only ended up being 20 pages, but I felt like I had written a book. It was one of the few moments in my life where I can genuinely say I did the best I could. I put in every ounce of effort I could.  I felt that way when leaving my mission.  I felt that way when leaving my job last year, and I felt that way then.  I always try to do my best work but this was something different.  This was my heart and soul.  Dr. Holland recognized that and was very encouraging.  In fact, when others in the class wanted to extend the date of the paper he called me to discuss it.  I felt that an extension would be one more example of how I worked the hardest but then ended up the same as everyone else.  Perhaps this comparison was beneath me but I just felt like I had earned the highest grade in the class for once in my life.  I wanted to prove to Dr. Holland and to myself that I could do it without any extension or help.

Finally I turned in the paper and low and behold an A! It still holds up as one of the best moments of my life. To end the class Dr. Holland gave me a book called Incidents in the Life of a Slave Girl.  It has since become one of my favorite books (anyone who has been in a book club with me can attest to that).  The inscription on the book reads:

I hope you enjoy this stirring narrative of a female slave.  I believe it embodies many ideals you seem to cherish and represent yourself!  Courage, discipline, and freedom for all– especially those who lacked it in previous societies.  It’s been a great delight having you in class.  Both as a student and  teaching assistant.  Good luck, Prof.  Holland.

This meant so much to me.   It’s hard to describe.  It just did. Still to this day, I feel motivated to do my best because of Dr. Holland’s faith in me. I don’t want it to have been for naught. I want to mean something to the world.  I know I can accomplish great things.  That is the power of a great teacher.  Dr.  Holland isn’t perfect.  He was just the influence I needed at that moment, at that time, and he rose to the challenge.

Everyone has key figures in his or her life- people who if they made a biographic film  would have to be in it.   My parents, my siblings, my grandparents, Dr.  Holland and a few key friends would have to be there. I am not a believer in total fate, but I do believe that each person has key people who we are supposed to meet along the way- both people we need to help, and that improve our lives.  Dr.  Holland was such a key person for me. I am grateful that he took the time to nurture my intellect and encourage me to do my best. He saw a potential in me that I didn’t even see in myself and once again- that’s a great teacher.  I am so excited for his future as the President of UVU, and I wish him all the best.  Good luck! 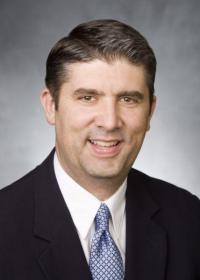